Who is a super weed fighter? What weed district is doing a great job? Which group or young person is battling weeds? If someone worthy comes to mind, please submit a letter of nomination of this person, group or business to the MWCA Awards Committee for consideration for a Montana Weed Control Association Award.

In 2021, the MWCA will award the following categories:

Awards will be presented at the MWCA Annual Awards Ceremony during the 2022 MWCA Annual Conference.

Barbra (Barb) H. Mullin was born and raised in Helena, Montana and received a B.S. degree in Botany and Plant Protection and a M.S. degree in Plant Pathology from Montana State University. She spent her 24-year professional career working for the Montana Department of Agricultural, holding the position of state weed coordinator and program manager.

Barb was passionate about protecting Montana’s native landscapes from terrestrial invaders like leafy spurge and spotted knapweed but was also passionate about aquatic plant management. She was a dedicated public servant for the people of Montana and the cause of environmental protection. She took advantage of every opportunity, every teachable moment to educate others about the threat of non-native, invasive plants. Barb was the driving force that created the First Montana Weed Management Plan for both terrestrial and aquatic plants.

While her life was cut short, it was a life well lived with purpose and dedication to a noble cause. Each year when the MWCA recognizes individuals who share Barb’s commitment, dedication, and pursuit of environmental protection through science and plant management. This is the most prestigious award the MWCA awards. Agency personnel, officials and private individuals may qualify.

Principle criteria for this award includes: 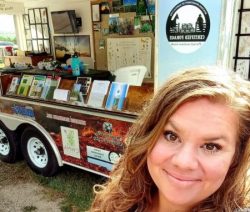 To learn more about Kelsey, read a quick bio here.